“A Southern Perspective on the North”

“With the Head up North”

This blog features photographs from Austrian scientists working in the Arctic and Subarctic: https://aas.photo.blog/ 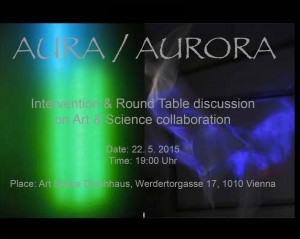 A Polar evening with a panel discussion on the magnificent Aurora Borealis in science & art and a review of Canada’s Arctic Council chairmanship 2013-2015. Hosted by A.A.S., the Canadian Embassy and other Arctic related partners.

The breath-taking Polar lights – Aurora – fascinate, scare and raise questions about the unknown. Therefore, they are matters of inquires in natural sciences as well as in the humanities and social sciences. At the same time they inspire societies in creating collective myths, stories and agency. Not least, they inspire artists to reflect, interpret and intervene with this spectacle. This event unravels and contests perceptions of the Aurora phenomena among artists and scientists.

This is the most recent phase of the ongoing art & science project presenting an interactive interpretation of the Polar Lights – Aurora Borealis and Australis, the magnificent and dynamic spectacle that has retained a near-mythical status in circumpolar cultures over millennia. The dazzling geo-physical phenomenon, typically observed in the Circumpolar Regions is not only a brilliant spectacle but it also makes visible the invisible world of electromagnetic activities.

The collaboration between art & science has the potential to create new knowledge, ideas and processes. New ways of seeing, experiencing and interpreting can lead to benefits in both fields. This round-table discussion aims to explore trans-disciplinary collaborations within the creative process of art, science and technology in the context of the Polar Lights.

Introduction by the hosts Mark Bailey, Ambassador of Canada to Austria: “The Arctic, its economic and social development: Looking back on Canada’s achievements for the People of the North during its Arctic Council chairmanship 2013-2015”

Chair: Dr. Verena Traeger, Curator, Institute for Social- and Cultural Anthropology, University of Vienna & Spokesperson of the “Working Group Circumpolar Regions and Siberia” at the German Association of Anthropologists

Embassy of Canada in Austria

On April 28th, we celebrate the foundation of APECS Austria, which is part of the international and interdisciplinary Association of Polar Early Career Scientists (APECS). APECS provides a platform for interdisciplinary networking and exchange of researchers working in Arctic and Subarctic regions.

The photo and poster exhibition “Fieldwork in the Arctic and Subarctic” shows the diversity of Arctic and Subarctic environments, and gives insights into daily lives of residents and researchers. The photographs of the exhibition illustrate the context of research in Polar regions beyond conventional formats of texts, tables and numbers.

The exhibition will be open on workdays from April 28th until May 16th.
We are looking forward to meeting you, APECS Austria

Exhibitions “Pictures of the North”

Pictures of the North: The Sami community’s “traditional” life in contemporary Sweden — a photo exhibition

Our AAS-member Kerstin Schröder, linguist and expert on Scandinavia, did research intensively among the Sami in the north of Sweden. The exhibition presents pictures taken by David Bacher, a Paris based photographer, while their stay among the Sami.

In March 2008 a photo exhibition about the life in the North with pictures of the Nenets artist Habecha Yaungad is shown in Vienna. Besides the photo exhibition, several lectures and film screenings took place.

These events are dedicated to the nenets, the indigenous people in Russia’s northern arctic region. Habetscha Jaungad, a nenets journalist gives impressions about his culture and life. The events were organized by AAS members.